Job hunters may not know this, but there are rules to interviews, and a whole process they don’t see. A basic job interview is quite a production. 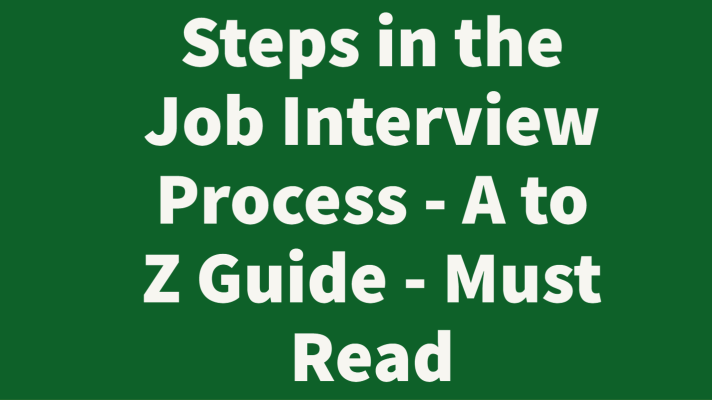 Starting with the need to hire someone, the whole process is supposed to follow a systematic method. Sometimes you can learn a lot just by watching what’s done properly and what isn’t. That can save you a lot of bother down the track, and prevent wasting time and effort.

The process is usually started, ironically, with a management decision about the job, rather than a decision to hire someone. Even if a job is part of a budget structure, the temptation is to save costs, and see if they can do without more staff. This can be downsizing by other means, and it’s a normal process in the modern workplace. If a job is advertised, you can be sure that job is considered necessary.

The hiring process follows. This starts by picking a convener of the interview panel, (usually a supervisor) who’s responsible for the entire process, including writing the recommendation for appointment.

The first stage is drafting the advertisement, which is based on the duties of the job. In large organizations, this may be done by an employment agency, but the process is basically the same, for legal and administrative reasons.

Job advertisements are supposed to comply with applicable laws. That includes not misrepresenting terms of employment, such as commission-only work. Strictly speaking anything an applicant should know, specifically related to conditions of employment should be made clear.

Related:  How to Answer Most Common Interview Questions [INFOGRAPHIC]

During this time the convener either appoints, or is provided, with panellists.

The next stage is the dreaded application cull. The panel, with a copy of the advertisement, go through the applications, which may be in the hundreds, or thousands. When large numbers of applications are received, the entire process may be electronic, working on keywords.

The manual cull isn’t actually much different from an electronic cull. The job ad is basically a checklist by default. It can be a very laborious, and extremely time-consuming, process. If done by an employment agency, the cull is done by basic formal guidelines. For employment agencies, this is a commercial contract, and compliance with contract requirements is a primary driver. Their culls, therefore, can be expected to be pretty arbitrary.

There are variations on this process, if it’s done in-house, where the panel aren’t directly involved in the cull, which is done exclusively by the convener. But there are obvious advantages in having panel members familiar with the needs of the position. By the time the interviews start, the panel will be fully aware of the job requirements.

The convener organizes the interviews. In the case of an employment agency, the person managing the hiring process oversights the agency. This adds another level of formality to interviews, and arguably increases the degree of difficulty for applicants.

During this period, or before, in some cases, the interview questions are formulated. These can be standard questions, but often a judgment is required on specifics of the job, where technical or professional elements come into the interview structure.

Everybody, naturally, gets the same questions, and these are used as a standard of comparison. The interpretation of answers, however, ultimately winds up as the convener’s problem. Unless a technical advisor is part of the panel, a general standard of answer quality is going to be the deciding factor. Sometimes the convener is the technical expert, for obvious reasons, in jobs where the professional quality of the job is a major issue.

When conducting the interview, the convener is also responsible for the content and standard of interview procedures. In most countries, equal employment is the basic criteria. The job interview is a legal process. There are potential legal ramifications for any employer who conducts an interview improperly, or who breaches employment law in the course of an interview.

So the convener is really saddled with a series of obligations, from advertisement to appointment. Employers aren’t immune to civil law, even if they don’t create any issues for themselves with statutory law. There are also internal procedures for grievances in many organizations. That’s a few of the reasons the interview process is considered such an important and useful method of preventing inequities in employment.

After the interview, the decision is made, and turned into a recommendation for management approval. This is another formal process. The information provided by the successful applicant is the basis of their being hired, and they are also likely to be held responsible for any false information provided.

This is another legal minefield:

The convener is obliged to take all reasonable care in selecting and recommending applicants. Even if everything is done properly, if anything goes wrong the convener is responsible. That can mean big problems for the convener if there’s an issue with information provided. It can mean a sacked convener, in extreme cases.

The applicant, if wrongly accused of providing false information, is being accused of what is essentially fraud. If false information was provided, it is basically fraud. With that can come lawsuits, against the applicant and against the employer. In some professions, that accusation can be a career disaster. So applicants will defend themselves, and the result winds up in a court.

For job hunters, understanding the interview process, and the way it’s supposed to operate, is basic self defence. You can tell a lot about employers by the way they conduct interviews, because it’s normal business, and there are no excuses for these things not to be done properly.

Don’t be totally passive when applying for jobs. Remember to be critical, and you’ll find the whole process a lot less intimidating.

At interviews, you should at least in part, be interviewing the employer. Job hunters don’t need to be working for incompetent employers. You need to be sure you’re working with reliable people. After all, this is your career, and you can do without any false starts or dead ends.